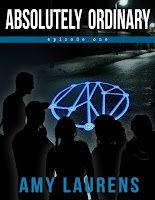 I mooched into the room five minutes late with my school blazer itching unbearably at my neck. I ran a finger around my collar, feeling like I was going to choke at any second, and scanned the room for Megan. She was the only thing that would make this stupid day bearable. She was nearly the only thing that made joining the League of Extraordinary Losers worthwhile, but I’d be lying if I said it wasn’t fracking cool to be able to walk through a door without opening it or, you know, rummage in someone’s schoolbag without unzipping it.

Not that, you know, I could do that around anyone but the Losers, because if anyone else saw me do it I’d a) land a detention (big woop) and b) probably be examined to within an inch of my life. Such was the joy of being a teenager with superpowers, even if they were ‘absolutely ordinary’ ones. I sniffed. Ordinary my arse. The other misfits could try to pretend they were ordinary if they liked, but I for one wasn’t the least bit afraid of being an individual.

A group of kids sans uniforms and ergo from one of the public schools crowded past me, sniggering as they went. I shrugged self-consciously inside my blazer. Stupid uniform. Stupid public school kids. Stupid Maths competition.

“There you are.” Megan grabbed me by the elbow before I even realised she’d appeared and dragged me forward through the crowd. “Greg thought you’d chickened out.”

“Of the E. James Downward Mathematics competition? Now why would I do a thing like that,” I said, grinding my teeth as Megan towed me past the public school contingent who’d sniggered at me before.

“Oh, I don’t know,” Megan said with the air of explaining something simple to a very stupid person. “Maybe because you’ve missed every practice we’ve had this week?”

I pulled my arm away and shook my sleeve back in place. “Yeah? And?” It was Maths, for crying out loud. I could do this crap with my arms tied behind my back, and wasting every lunchtime with the Dorkazoids in some musty classroom had lost its gloss once they became more concerned with practice Maths questions than the freaky cool things you could do with some basic scientific knowledge. Create wind currents, for example. School uniform skirts looked heavy, sure, but a well-placed draft could lift them like a tissue.

Not that I would do that. And definitely not to Megan. That one time, it was the draft from the window, I swear it. Because, like, I’d tell her if I discovered something else awesome that we could do. Truly.

But anyway, she dragged me over and plonked me down at our table up the front right as the presiding teacher tapped his microphone and launched into a long-winded and unnecessary explanation of what today was about, why we were competing, and who gave a fig in the first place. Which clearly wasn’t me. Greg muttered something under his breath at me, no doubt his usual charming hello, and I settled down to the serious business of ignoring him.

After far too long, just as I was about to die of boredom, Head Teacher who fancied himself Great Orator finally shut up, and the first round of questions was handed out. I let the League of Losers stress over it for a while – though Matt wasn’t doing a half bad job – before I snatched the question sheet out from under Greg’s elbow and began dictating.

Greg tried to protest, Megan launched into a tirade against both of us, Pip put her head down on the desk, and Matt, the only sensible person at the table other than myself, wrote down what I was saying.

“…and then it all equals seven,” I finished, putting the page back down on the table and nodding at Matt. “Right?”

He nodded back, capped his pen, and placed it on the finished answer sheet. “Right.”

“See?” I said, leaning back in my chair and folding my arms. “You lot just need to learn to chill.”

Megan angled her chair away from me and pointedly struck up a conversation with Pip. What was that all about? I’d done what she wanted, hadn’t I? Here I was, stuck at this stupid Maths day when I’d rather be doing just about anything else, and I’d given them all the right answers and everything, and now she was mad at me?

I shook my head. “Women,” I muttered under my breath.

Greg, sadly, heard me. “You’re a moron, Chris,” he said as he shoved his chair back. He grabbed the answer sheet and stalked to the judges’ table.

I rolled my eyes.

Three rounds later and I was just about comatose from the sheer excitement of it all. Problem after problem after problem, and they weren’t even that challenging. I mean, sure, a couple of times one or two of the others got the answer before I did, but I was distracted. It’s not like I was trying.

At long last we broke for lunch, and I hurried out of the room as fast as I could. Megan had barely looked at me all morning, and there was no way I was going to sit around with the Losers for forty-five minutes while everyone looked on and sniggered.

I was nearly to the exit when someone grabbed my arm, spinning me around.

“Where are you going?” Megan demanded.

“You know we’re not supposed to leave the premises.” She put her hands on her hips and raised an eyebrow. Good thing she wasn’t a real superhero; a laser stare on her would be dangerous.

“I’m not,” I said, smoothing down my blazer and heading back towards the exit. “I’m getting lunch.”

“There’s lunch at the canteen,” Megan said, not following.

“I want real food.” I reached the door. Stupid Megan and her stupid morals. Stupid Maths day. Stupid lunch. If I wanted to go eat some real food, why should anyone care? It’s not like I was nipping out for a spot of vandalism before returning to win the Maths trophy, was it now? I set my jaw and phased through the door, knowing it would make Megan furious – maybe furious enough to come after me.

But I strode away from the building, shrugging out of my blazer and stuffing my tie into my pocket, and no one followed.